The Taste of Authenticity

Made in Normandy, Le Rustique Camembert’s pronounced flavour contains all the richness of its birthplace and the expertise of the Master Cheesemakers - a cheese with character.

It is said that it was a paper merchant with an excess stock of red and white chequered napkins, who came up with the idea of using them to present Le Rustique Camembert. Ever since, the chequered cloth has become one of the recognisable symbols of the brand in France and worldwide.

Almost 40 years later, the Le Rustique brand has been broadened to include a range of products recognisable for their traditional-looking packaging, both in France and further afield: Camemberts, Coulommiers, Le Rustique light, etc.

Responsive to the rhythm of the seasons, complementary products are Le Rustique made with spring milk and Le Rustique with Périgord black truffle at year end. This Norman product can also add pleasure to pleasure: following the Spécial Affiné ripened version launched in 2016, for the 2.5 million lovers of “coulant” camembert, Le Rustique has announced a Grand Caractère longer-matured version for 2017. 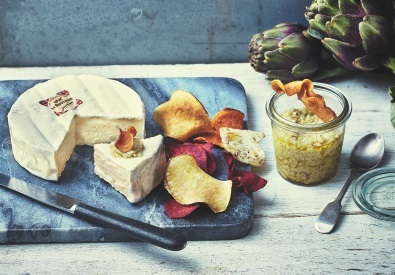 All the milk used to produce Le Rustique Camembert comes from Normandy. The brand monitors every product closely, from the origin of the milk to the final point of sale.

Fol Epi
A small but plump round cheese, decorated with wheat ears in relief; a tender texture and a fruity flavour… A unique sunshine-packed taste that makes Fol Epi a delicious and very attractive pressed cheese with holes.